A Brief History of Hydroponics

Past, Present and Future

Hydroponics has enjoyed a resurgence lately. Popularized in the 1940s, and solidified in growing culture by the 2000s, hydroponics actually began much further back in our ancient history. Let's explore a brief history of hydroponics.

Hydroponics is a type of horticulture in which plants are grown without soil. In hydroponic gardening, the water delivers nutrients to the plant roots, typically in a nutrient-rich solution. The benefits are faster growth cycles, reduced resource waste, and increased yields. What's not to love?

Seven Wonders of the World

According to Hellenic culture, The Hanging Gardens of Babylon were among the Seven Wonders of the Ancient World. If real, the gardens were built in the 6th century, relying exclusively on the Euphrates river as their source of irrigation. Without soil available in the arid desert, they may be the first example of successful hydroponics. In the 10th century, the Aztecs were reportedly using floating gardens in nearby lakes, and the Chinese utilized hydroponics for rice fields devoid of soil in the 13th century.

The 20th century was a flurry of studies and advancements in how we grow. In the late 1920s, Dr. William F. Gericke of the University of California extended laboratory experiments to further studies on nutrition in practical, commercial crops growing outside. He coined the term "hydroponics"; a word derived from the Greek words, hydro, meaning water and ponos meaning labor, or "water-working." His work is the basis for modern hydroponic growth.

The US Military made more recent advances, mostly innovations conceived through necessity. One example is Wake Island, an atoll in the Pacific Ocean, and frequent refueling stop. Incapable of producing crops, the rocky terrain prevented traditional farming. The US Air Force made small, 120 square feet hydroponic growing beds, which eventually produced a weekly yield of 90 pounds of fresh produce every week. 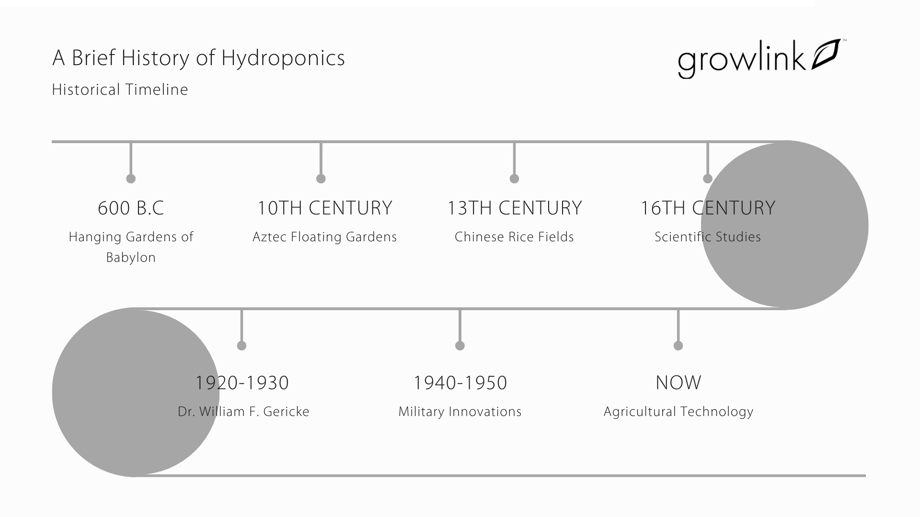 Advances in hydroponics have grown tremendously in the last century. We now fully understand that healthy plants require water, sunlight, carbon dioxide, and nutrients to thrive.

Technology has advanced to allow the monitoring and automation of many aspects of the modern hydroponics greenhouse or grow room. Utilizing environmental controllers allows growers to monitor essential data like heat, CO2, and light levels. By combining monitoring with full automation of things like irrigation, airflow, and lighting, the smart hydroponics farm is far more efficient than their predecessors. The use of agricultural technology, or agtech, increases hydroponics' benefits, including quicker growth cycles, increased yields, and a reduction in resource waste.

As technology continues to play a role in how we grow, hydroponics' future looks as crystal clear as the water plants thrive in. The use of the internet of things or IoT, machine learning, and artificial intelligence improve the ability to predict with more accuracy than ever before.