What Type of Lighting Is Right For My Indoor Grow? 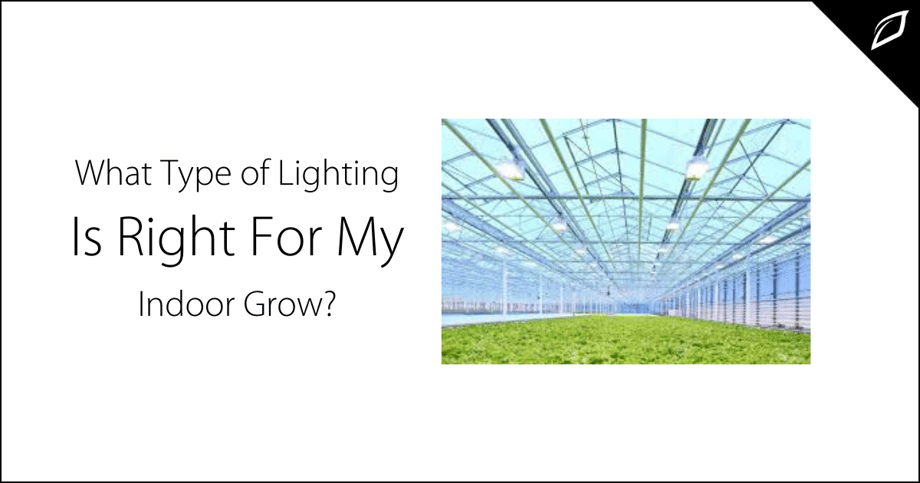 When it comes to fueling plant growth, lighting is one of the main ingredients of a maximum yield recipe. Figuring out if you want full natural sunlight only, a mixture of artificial light and natural sunlight or strictly artificial light depends on many factors like location, access to high load utilities, and even regulations. Let's begin with the current lighting options available.

What Are My Lighting Options?

Artificial lighting comes in a variety of types, and within each type, is a range of wavelengths representing the entire color spectrum. Three primary types are generally used for controlled environment agriculture; LED, fluorescents, and HPS lights. Each has its benefits and drawbacks; let's explore them.

Most people are familiar with LEDs, but LEDs are revolutionizing industrial lighting in agriculture. The reason is the cost. Not the cost to purchase – LED lights are generally more expensive than more traditional types – but their cost to run. LED lights can use up to 80% less energy than conventional incandescent lights, with lifespans of up 25 thousand hours. For industrial farm applications, those kinds of savings have an enormously positive impact on the bottom line.

LED lights also come in a variety of colors. They can be easily combined and mixed to produce particular wavelengths of light, making them highly versatile for growers looking to dial in specific colors to alter or maximize growth. They also give off almost no heat, which is a significant upside.

The benefits of LEDs make them ideally suited to large-scale grow operations where electricity costs represent a concern, and a need exists to tune light wavelengths carefully. However, for smaller home operations, the initial acquisition costs can be prohibitive.

Fluorescent lights offer a few of the same benefits that LED lights do, albeit not quite to the same extent. Fluorescents come in two primary forms – tubes and compact bulbs. Tubes are the long, skinny bulbs that most people are familiar with from their school or office. Compact fluorescent bulbs, or CFLs, are the twisty, more traditionally shaped bulbs that have become a massive hit in the home lighting market. Both types are more efficient than incandescent lights, and CFLs can last up to 10,000 hours.

One downside of fluorescent bulbs is that they're more expensive than incandescents – albeit not as much as LEDs – and in the case of tubes, they also require additional structure to be installed to support them. Another is that they contain mercury, which means a broken bulb represents a chemical hazard.

Because they can be easily installed in any standard socket, CFLs are favored by most small growers whose crops aren't large enough to warrant LED lighting.

Like fluorescent tubes, they require specialized supports and ballasts to regulate the electricity flow. That makes them cost-prohibitive for most smaller growers. However, HID lights offer growers the ability to control the color of light their plants are exposed to better than fluorescents and cheaper than LEDs, making them a reasonably popular choice with large-scale growers that haven't switched to LED lighting.

What Is The Best Lighting For My Operation?

Arguably the most significant impact artificial lighting has on indoor agriculture is the ability to speed up growth and shorten cycles, allowing space to be turned over quickly for the next batch of crops. That ability to shorten growth cycles comes down to two primary factors; the ability to expose plants to even lighting for more hours per day, and the ability to custom-tailor the light they get to their individual needs.

Different plants grow best with varying amounts of light. Lettuce, for instance, prefers around 15 hours of sun per day. Under a natural setting, that amount may or may not be possible based on factors like season, cloud cover, latitude, etc. Indoor lights allow growers to expose their plants to as much (or as little) light as is required to get the best results possible.

Lighting can also be tailored based on color. Plants respond differently to different wavelengths of light, with yield and quality being affected by various combinations of red, blue, and green light. LED lights are exceptionally versatile and offer growers the ability to finely tune their RGB mix to alter the growth of their crops. That kind of targeted lighting is a massive benefit for large-scale growers and, along with the power savings, one of the main reasons LEDs are starting to displace HID lights.

From a plant's perspective, a photon is a photon. We now know that most of the wavelengths of sunlight don't do all that much for plants. That means that in many cases, indoor lighting – especially LED lighting – is more effective than the sun. The benefits of that superior effectiveness, along with the ever-growing wide-scale adoption of indoor lighting, represent a very bright future for indoor agriculture.