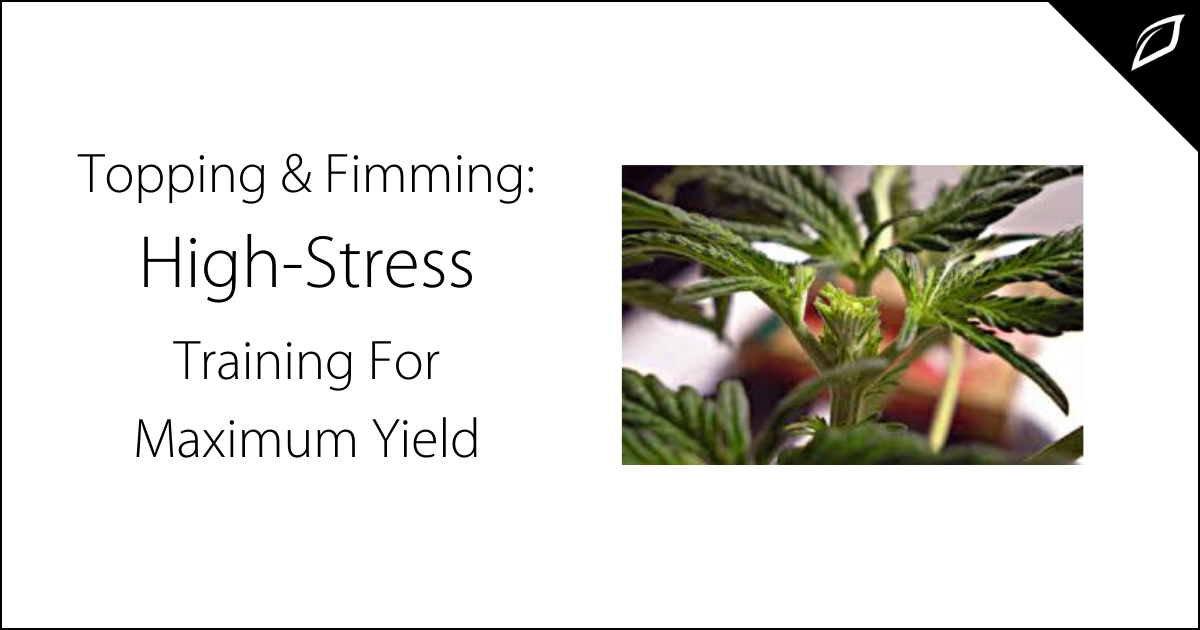 There are numerous advantages to growing cannabis indoors under artificial lights. It allows complete control over the growing environment, better crop safety, and for micro-growers with only a couple of plants, the convenience of growing right at home. But there are some definite drawbacks as well, one of which is that marijuana plants grown indoors can fail to reach their full potential because of how they’re naturally designed to grow. Maximizing yield is obviously a top priority for every grower, no matter how large or small their crop may be, so anything that helps maximize plant growth and health should be embraced. Topping and fimming – two types of high-stress training – do exactly that, making them fantastic tools for indoor and outdoor growers alike. Both are simple to perform and, done with care, have the potential to turn even a solitary plant into a monster producer.

Cannabis plants naturally grow in a Christmas tree shape, with one main cola – the tight cluster of buds that grow atop the central stem – and multiple sets of side branches growing from bottom to top. That cone-like configuration works fine out in nature, where the sun moves across the sky, and all parts of the plant get a healthy dose of sunlight as the day goes on. But indoor plants grow under fixed overhead lighting, and as with all plants, cannabis grows towards the light. That means indoor plants, if left to their own devices, tend to want to focus all their growth vertically on that single, central stem and cola.

That causes a number of problems. First and foremost, the lower areas and side branches don’t get the light they need, resulting in larfy, immature buds. Secondly, as the center stem grows, the lights above have to be raised to accommodate it.  That causes space issues as the plant gets taller and further distances the lower areas of the plant from their light source. In the end, the overall result is suboptimal yields, far below what the plant could produce with a little help.

The solution is high-stress training. HST is designed to coax the plant to grow a wider, denser canopy, essentially inverting the Christmas tree shape. It’s accomplished by strategically chopping off part of the top of the plant, turning the main stem into multiple stalks, and sending a shock of growth hormone through the plant as a whole. As the name suggests, it does cause stress, but done properly it can supersize yields while posing no real risk to the plant. With repetition, the wider, fuller canopy produced by HST maximizes the plant’s light exposure, resulting in a larger number of healthier, more mature flowers.

High-stress training comes in two primary varieties – topping and fimming. Each utilizes strategic cutting during the vegetative stage to promote the growth of new stalks near the top of the plant, but they differ in where the cuts are made and how the plant responds. Both can be done on indoor plants, and both can be done multiple times to create beautiful, wide canopies and greatly improved yields. While the differences in technique are minimal, some growers may prefer one over the other, and trying both will give a clear picture of how individual plants respond to each.

Topping: Topping is the act of cutting off the newest growth – or terminal bud – at the tip of the main stem. If done correctly, it results in the pruned single stem growing into two new stalks with two colas. Since growth hormone is normally focused on the central bud – also known as the apical bud – its removal also allows the resulting rush of growth hormone to be spread around the entire plant, promoting healthy growth from bottom to top.

Timing and placement of the cut are key to successful topping. It should always be done in the vegetative state, ideally after a plant has reached around a foot in height. It can be tempting to cut earlier, but patience is paid off with healthier buds and better yields. The placement of the cut should be directly on the main stem, just below the newest growth. A clean cut is best, and the scissors or blade used should always be sterilized. Since topping is a high-stress training method, it’s important to let the plant recover for a couple of weeks before doing any further cutting or pruning. But once the plant has stabilized and the new stalks are established, the topping process can be repeated over and over, potentially producing enormous yields.

Fimming: Moving a topping cut up slightly so that it cuts above the main stem is called fimming. The term fimming comes from the acronym FIM, which stands for “fuck, I missed.” The idea is to remove about 75% of the growth above the main stem, rather than cutting the stem itself. Instead of turning the main stem into two new offshoots, fimming will result in four or more shoots emerging from the site of the cut. Logic might suggest that fimming is the obvious choice since four is more than two, but plants trained using the FIM method generally still grow fairly tall and don’t develop the wide, dense canopies that multiple rounds of topping can produce.

Fimming requires less precision than topping, and it can even be done by ripping the top growth off with the fingernails – although a clean tool is still ideal. As with topping, the removal of the central growth will cause a rush of hormones to be distributed more evenly around the entire plant, benefiting the buds at the sides in addition to the new growth at the top. And just like topping, a couple of weeks of recovery should be observed to ensure the plant has time to shake the shock off before any further training is done.

Larger yields and higher quality are the goals for all cannabis crops, from the largest industrial farms to the smallest home gardens. While growing indoors provides a great deal of control, it also takes the plants out of the environment that nature designed them to flourish in, and that inevitably leads to some limitations. The primary one is that the stationary overhead lighting used in indoor growing can’t provide the even coverage that cannabis plants need to reach their maximum potential. By embracing high-stress training like topping and fimming, plants that want to grow vertically can instead be naturally trained to grow wider, fuller canopies. That means easier indoor space management, better light coverage, and, most importantly, bigger yields of higher quality buds – all thanks to a few quick snips!