The first time I saw the word fertigation, I was confident that it was a typo. Still, after researching and understanding the union of irrigation and fertilization, I began to get it. And while I'm not as knowledgeable as some growers, I have been educated on the subject matter. In this blog, we're going to focus on fertigation as it applies to indoor cultivation. So let's look at what fertigation is and why it may help you and your grow operation save valuable resources.

According to Wikipedia, fertigation is the injection of fertilizers used for soil amendments, water amendments, and other water-soluble products into an irrigation line or system. Fertigation is related to chemigation, the injection of chemicals into an irrigation system. The two terms are sometimes used reciprocally; however, it's commonly controlled and regulated due to the chemicals used. Basically, fertigation adds supplementary nutrients or corrects nutrient deficiencies in plant tissue. It's utilized on high-value crops such as cannabis, vegetables, turf, fruit trees, and ornamentals (flowers.)

Traditionally fertigation was used in trickle irrigation made for outdoor use, but the legalization of cannabis in harsh weather regions sparked an increase in indoor commercial cultivation.

Fertigation is practiced widely in commercial agriculture and horticulture operations. More recently, fertigation is increasingly being used for landscaping and home grows as do-it-yourselfer units become more reliable and easier to use like the ones made by Current Culture H2O. More extensive commercial applications from larger technology companies like Growlink, Argus Control, Priva, Rhythm, and Netafim dominate the large industrial farming and indoor cultivation space. This is especially true due to the explosive growth of indoor cannabis growers. Their high-value crop requires precision feeding and dosing of nutrients.

Fertigation has copious benefits that make it an excellent choice for commercial growing operations. According to a 2012 study by Purdue University, controlled application of nutrients and water increased versatility of fertilizer application and allowed better timing of application associated with crop growth stages. Perfect for cannabis growers that require different dosing recipes at different plant developmental stages. It also allows small dosage application and minimizes leaching and negative environmental impacts. By utilizing fertigation, you increase nutrient absorption, reduce fertilizer and water usage, and have more precise control of the dosage.

There are some downsides to fertigation, but most of those deal with the outdoor growing of crops that don't apply to indoor fertigation systems.

Considering the many benefits of fertigation in the indoor growing of crops, it's easy to see why it's becoming an increasingly competitive space. But choose wisely. These are complex systems that require expert installation and professional monitoring. Choose a company with responsive customer service to keep you growing in the event of a failure. It can be the difference between losing an entire crop or saving it with a 24/7 level of support. 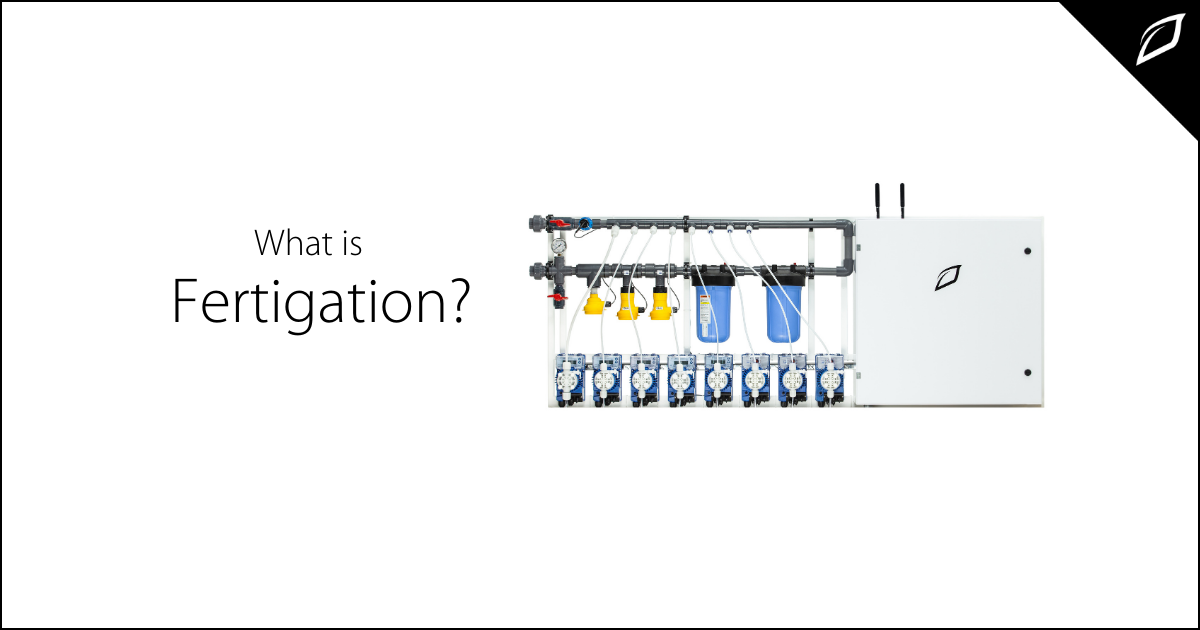