How To Spot And Resolve Nutrient Burn 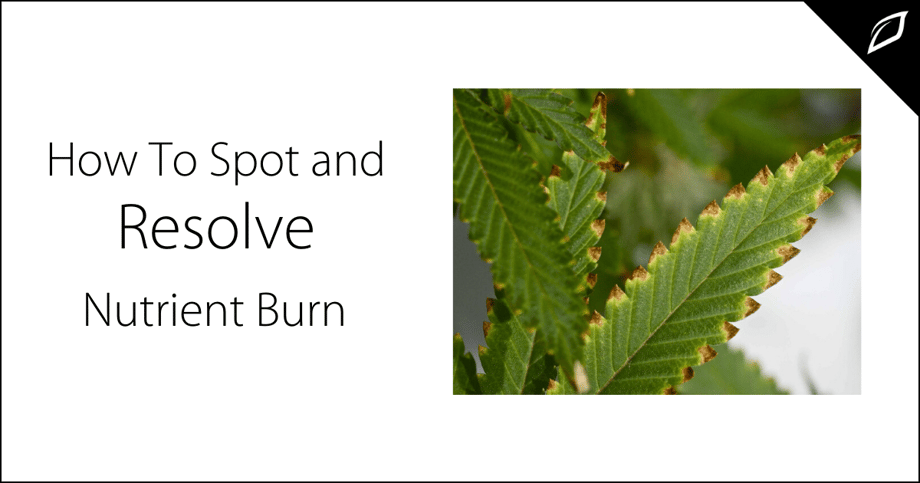 How to spot and resolve Nutrient Burn.

One common problem that many indoor growers run into is the leaves of their plants browning, curling, and drying out around the edges. The most likely cause is nutrient burn – or “nute burn,” as it’s commonly referred to in the cannabis growing community.

While nutrient burn can sneak up on even the most experienced growers, it’s normally a side-effect of inexperience. Damage from nutrient burn isn’t reversible, but luckily, the obvious symptoms it produces mean it can be caught relatively quickly and stopped before any further damage occurs.

What is nutrient burn?

Nutrient burn is essentially damage caused by over-fertilization. Plants need four things to grow and be healthy; light, air, water, and nutrients. Those nutrients include plenty of nitrogen, and smaller amounts of a wide variety of other types like potassium, calcium, and more.

Plants don’t have a mechanism to deal with “overfeeding,” and so plants taking in more nutrients than they can handle get sick. There are a number of reasons that might happen, including unrelated illnesses or pests damaging the plant. It could also be the result of an environment that’s simply too nutrient-rich, to begin with. In any case, a plant receiving an overabundance of nutrients will begin to suffer from nutrient burn, and, left unchecked, the consequences can be devastating.

Nutrient burn can cause root damage, but the most obvious and most significant damage happens at the leaves. That’s because the browned, scorched areas of leaves suffering from nutrient burn can’t be used to absorb light, and in turn, can’t contribute to the photosynthesis that keeps the plant alive and healthy. That’s why it’s so important for growers to understand that nutrients are just one part of a balanced system, and that trying to force growth through over-fertilizing actually hinders growth by throwing the system out of whack.

What are the symptoms of nutrient burn?

Cannabis plants suffering from nutrient burn show symptoms in a few different ways, and depending on the symptom, it can sometimes be possible to determine which specific nutrient a plant is receiving too much of.

There are some early warning signs that can alert growers to a buildup of nutrients in the plant prior to burning. Those warning signs include:

Nutrient burn symptoms start at the tips of the leaves because as excess nutrients build up, the plant attempts to pass them along, and the leaf tip is the furthest that they can move. Therefore, it’s important to keep a close eye on changes to a plant’s leaf tips to ensure nutrient burn is caught as early as possible.

Symptoms to worry about:

As nutrient burn progresses, it’ll move from the very tips of the leaves back and inward. It’s this point that action must be taken in order to maintain a healthy plant, because nutrient burn left unchecked will continue to progress until entire leaves die and drop off.

Symptoms of advanced nutrient burn include:

While some or all of these symptoms will be present in a plant suffering from nutrient burn, curling leaves are often an indication of an overabundance of nitrogen, in specific. As soon as these more advanced symptoms are recognized, growers must isolate the nutrient burn and fix the source of the over-fertilization to prevent further damage.

How can nutrient burn be resolved?

The good news is that if nutrient burn is caught early, it can be fixed prior to causing any significant damage, allowing the plant to resume healthy growth.

💡--For tips on snipping, topping and fimming CLICK HERE! --💡

Flush out the growing medium:

Before more balanced fertilization can be applied, the overabundance of nutrients already built up need to be flushed out. In a hydroponic setup, that entails emptying out all reservoirs and filling them up with pH-balanced water. That water should be run through the system for at least 24 hours, with the system’s electrical conductivity (EC) levels being checked daily until the proper fertilizer salt levels are reached.

In a soil-based growing environment, flushing out the excess nutrients means heavy irrigation with pH-balanced water. Growers can simply heavily water their plants, allow the water to run off through the potters, and then repeat until the runoff measures in a healthy range with a total dissolved solids meter.

Finally, growers need to isolate the source of the over fertilization in the first place. In soil-based environments, growers should ensure the medium they’re using isn’t too “hot” – like fresh manure or artificially nutrient-enriched soil.

In a hydroponic environment, growers should dial back the concentration of their fertilizers. If using prepackaged mixtures, growers can over dilute their solution to a lower level than the manufacturer’s recommendation. Growers mixing nutrients by hand should employ an EC meter to ensure that their mixtures haven’t been accidentally over concentrated and that EC levels fall in line with what their previously nute-burned plants need.

Lighting should also be checked to ensure plants aren’t being under lit, as a plant getting less light generally won’t require the same level of nutrients. In that case, nutrient burn is actually a symptom of a lighting problem, and adjusting light levels will unlock additional nutrient capacity and better growth.

Different crops may respond differently to the exact same nutrient mix, and sometimes even individual plants will require special attention. The key for growers looking to keep their crops healthy and to maximize growth is to constantly monitor their grow environments and to make adjustments based on the signs their plants give them.